Up to 25% of American adults experience intense anxiety sometime in their lives. The prevalence of true anxiety disorders is much lower, although they are still the most common psychiatric conditions in the United States and affect more than 20 million Americans.

If you have developed General Anxiety Disorder (GAD), you may be wondering “why me”?

Gender. With the exception of obsessive-compulsive disorder (OCD), women have twice the risk for most anxiety disorders as men. A number of factors may increase the reported risk in women, including cultural pressures to meet everyone else’s needs except their own, and fewer self-restrictions on reporting anxiety to doctors.

Personality Factors. Children’s personalities may indicate higher or lower risk for future anxiety disorders. For example, research suggests that extremely shy children and those likely to be the target of bullies are at higher risk for developing anxiety disorders later in life.

Children who cannot tolerate uncertainty tend to be worriers, a major predictor of generalized anxiety. In fact, such traits may be biologically based and due to a hypersensitive amygdala — the “fear center” in the brain.

Family History and Dynamics. Anxiety disorders tend to run in families. Genetic factors may play a role in some cases, but family dynamics and psychological influences are also often at work. Several studies show a strong correlation between a parent’s fears and those of the offspring. Although an inherited trait may be present, some researchers believe that many children can “learn” fears and phobias, just by observing a parent or loved one’s phobic or fearful reaction to an event.

Social Factors. Several studies have reported a significant increase in anxiety levels in children and college students in the past two decades compared to children in the 1950s. In several studies, anxiety was associated with a lack of social connections and a sense of a more threatening environment. It also appears that more socially alienated populations have higher levels of anxiety.

For example, a study of Mexican adults living in California reported that native-born Mexican Americans were three times more likely to have anxiety disorders (and even more likely to be depressed) as those who had recently immigrated to the U.S. The longer the immigrants lived in the U.S., the greater their risk for psychiatric problems. Traditional Mexican cultural and social ties seemed to protect recently arrived immigrants from mental illness.

Traumatic Events. Traumatic events may trigger anxiety disorders, especially in individuals who are susceptible to them because of psychological, genetic, or biochemical factors. The clearest example is post-traumatic stress disorder. Specific traumatic events in childhood, particularly those that threaten family integrity, such as spousal or child abuse, can also lead to other anxiety and emotional disorders. Some types of specific phobias, for instance of spiders or snakes, may be triggered and perpetuated after a single traumatic exposure.

You can listen to or download to an excellent free “Rapid Relief” audio from Panic Away here.

GAD affects about 1 – 5% of Americans in the course of their lives and is more common in women than in men. It is the most common anxiety disorder among the elderly. GAD usually begins in childhood and often becomes a chronic ailment, particularly when left untreated. Depression commonly accompanies this anxiety disorder and depression in adolescence may be a strong predictor of GAD in adulthood.

Age and Panic Disorder. Studies indicate that the prevalence of panic disorder among adults is between 1.6 – 2% and is much higher in adolescence, 3.5 – 9%. Panic disorder usually first occurs either in late adolescence or in the mid-30s.

Gender and Panic Disorder. Women have about twice the risk for panic disorder as men. Panic attacks are very common after menopause. In one study, nearly 18% of older women reported panic attacks within a 6-month period, with over half of these attacks being full-blown. They tended to be associated with stressful life events and poor health. The effects of pregnancy on panic disorder appear to be mixed. It seems to improve the condition in some women and worsen it in others.

Obsessive-compulsive disorder occurs equally in men and women, and it affects about 2 – 3% of people over a lifespan. Most cases of OCD first develop in childhood or adolescence, although the disorder can occur throughout the life span.

Social anxiety disorder is currently estimated to be the third most common psychiatric disorder in the U.S. Studies have reported a prevalence of 7 – 12% in Western nations.

Age and Phobias. The onset of social anxiety disorder is usually during the early teenage years.

Gender and Phobias. Women are more likely to develop social anxiety disorder than men, although equal numbers of men and women seek treatment for it. Most people seeking treatment have had symptoms for at least 10 years.

Traumatic events are the main risk factor for PTSD, but some people can go through such events and not experience PTSD. Studies estimate that 6 – 30% or more of trauma survivors develop PTSD, with children and young people being among those at the high end of the range. Women have the twice the risk of PTSD as men.

After the September 11 attack on the World Trade Towers, about 7.5% of New York City’s population reported PTSD within the month of the event, which declined to 0.6% at 6 months.

Researchers are trying to determine factors that might increase vulnerability to catastrophic events and put people at risk for develop PTSD.

Some studies report the following may be risk factors:

Medication is useful for alleviating the symptoms of generalized anxiety disorder and is often prescribed in conjunction with other therapies. Some types of anxiety drugs can be habit-forming and are usually prescribed on a short-term or as-needed basis.

Different anxiety disorders have different medication regimens. Some are preventive and some are designed to cure the problem.

Antidepressants, particularly the selective serotonin reuptake inhibitors (SSRIs), are widely used to treat and prevent a variety of anxiety disorders. Examples of SSRIs that are commonly used to treat chronic anxiety include Prozac, Zoloft, Celexa, Paxil, and Lexapro.

The antidepressants Effexor and Cymbalta, which act on the brain chemicals serotonin and norephinephrine, and some of the tricyclic antidepressants, like Tofranil, may also help.

Finally, antihistamines (such as hydroxyzine) and beta-blockers (such as propranolol) can help mild cases of anxiety as well as performance anxiety, a type of social anxiety disorder. These medicines need to be taken daily whether you have anxiety on that particular day or not, as prescribed by your health care provider.

If you have acute anxiety (panic attack), you will likely need to take an anti-anxiety medicine as well. The most prominent of anti-anxiety drugs for the purpose of immediate relief are those known as benzodiazepines; among them are Ativan, Valium, Librium, Xanax, and Klonopin.

They have drawbacks: Benzodiazepines sometimes cause drowsiness, irritability, dizziness, memory and attention problems, and physical dependence. Nonetheless, in recent decades they have largely replaced barbiturates because they tend to be safer if taken in large doses.

Psychotherapy, with or without medication, is often considered a fundamental aspect of treatment for generalized anxiety disorder.

Several specific forms of psychotherapy have been described in research studies as helpful for alleviating the symptoms of GAD. Two — psychodynamic psychotherapy and supportive-expressive therapy — focus on anxiety as an outgrowth of feelings about important relationships. Another form of psychotherapy, called cognitive-behavioral therapy, involves learning behavioral relaxation techniques as well as restructuring patterns of thinking that foster anxiety.

Biofeedback is another helpful tool. In a series of sessions with a therapist, you watch your own brain-wave patterns on an electroencephalograph and gradually learns to control the waves. This teaches you to achieve a more relaxed state at will. Practitioners estimate that after about a dozen sessions, you will be able to exert control over mental activity without the help of the therapist or monitoring instrument.

You can listen to or download to an excellent free “Rapid Relief” audio from Panic Away here.

Daily exercise can be another helpful treatment for anxiety symptoms. If you find that exercise works for you, push yourself to go for brisk walks or undertake an active sport that you enjoy. Get your heart rate into the target range for your age for at least 30 minutes each time you exercise.

Since anxiety is often accompanied by shallow breathing, deep breathing exercises can also be helpful. Try the following form of yoga breathing:

Relaxing visualization can also help. A therapist or meditation trainer suggests relaxing images for a person to hold in mind. Once the image is in place, the person imagines soothing sensations such as pleasant scents and sounds. Eventually people can learn to do this themselves when they anticipate — or find themselves in — stressful situations.

You can listen to an excellent free “Rapid Relief” audio from Panic Away here.

Overcommitted and Burned Out 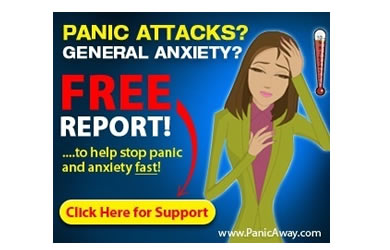