… And Should You Bother With It?

A fast-growing body of research is finding that telomere length in leukocytes, the white blood cells of the immune system, reliably predicts age-related disease — and can be affected by genetics, chronic stress and health behaviors, such as exercise and diet.

Twenty years ago little was known about the aging process. Many ideas existed but nothing was certain. Today we know how and why we age. We cannot control it just yet, but even that may change in the near future.

The human body has 100 trillion highly-specialized cells. Each of these cells has sets of chromosomes that contain your DNA and RNA, the latter being a compound that tells each cell what its job is. At the ends of each chromosome are cap pieces called telomeres. These telomeres keep the DNA and RNA from getting damaged by all of the activity that goes on in a cell.

What Your Immortal Cells Can Tell Us

Research demonstrated that the vast majority of cells in our bodies are mortal and have a fixed lifespan. On average, they can divide only 52 times and no more. When the cell cannot divide anymore, it is said to be senescent and susceptible to disease, infection, malfunctioning, and death. The reason cells cannot divide more than 52 times is that half of the telomere goes with the newly-cloned cell and half stays with the parent. Eventually the telomere is so short it cannot divide into two.

A tiny percentage of the cells in your body are immortal and can divide again and again with no limit.

While immune cells are essential for our survival, another category of immortal cells are very deadly, and these are cancer cells.

A Possible Cure for Cancer?

One really intriguing possibility presents itself: Can we cure cancer by denying telomerase to the portion of the body where the cancer is growing?

Well, such a medicine has been developed, and right now there are four clinical trials taking place with human cancer patients to test its effectiveness.

To be deemed a success, the medicine must:

(1) kill all cancer cells, not just some of them;

(2) not spread to other parts of the body and take out telomerase where it is assisting immune cells; and

(3) not cause serious side effects like heart attack or stroke.

If successful, the cancer cells would not be able to clone themselves and multiply. The existing cancer cells would become senescent and die. Since 90 percent of all cancer cells are rapidly growing and need telomerase, the medicine has potential to take out all of these cancers at once.

Time will tell if these studies are successful.

Another intriguing possibility also exists: Can we get the mortal cells in our bodies to welcome telomerase inside, turning these mortal cells into immortal ones? If done to all of our mortal cells, we would then become immortal. Believe it or not, this has already been done, albeit on a small scale.

Researchers collected human senescent cells that are incapable of dividing. Telomerase was force-fed to the cells in a test-tube study.

What happened? The senescent cells had their biological clocks reset to zero and started dividing again, just like baby cells. In one case they divided 26 times before the experiment came to an end.

Importantly, none of the cells in the experiment showed any cancer or tumor growth. This is great news, as scientists had previously speculated that the reason the body does not allow telomerase inside 99 percent of its cells — with the exception of immune cells and some cells that develop during pregnancy — is to prevent healthy cells from becoming cancerous.

Researchers are working on methods to introduce telomerase into mortal cells. It is one thing to do research with just 100 cells in a test tube and another to do it with 100 trillion cells in the entire human body. However, we know exactly what needs to be done to make the Fountain of Youth a reality.

Molecular biologist Elizabeth Blackburn shared a Nobel Prize for her research on telomeres—structures at the tips of chromosomes that play a key role in cellular aging.

The main message of her breakthrough book, “The Telomere Effect,” is that you have more control over your own aging than you may imagine. You can actually lengthen your telomeres—and perhaps your life—by following sound health advice, the authors argue, based on a review of thousands of studies.

Telomeres sit at the end of strands of DNA, like the protective caps on shoelaces. Stress from a rough lifestyle will shorten those caps, making it more likely that cells will stop dividing and essentially die.

Too many of these senescent cells accelerates human aging, the pair say. This doesn’t cause any particular disease, but research suggests that it hastens the time when whatever your genes have in store will occur—so if you’re vulnerable to heart disease, you’re more likely to get it younger if your telomeres are shorter, said Epel, director of the University of California, San Francisco’s Aging, Metabolism and Emotions Center.

Should we all just sit around and wait for more scientific telomere discoveries to happen?

That would be a great mistake, because we already know of four sets of factors that each correlate with longevity, reducing the risk of cardiovascular disease, cancer, diabetes, and dementia (as well as many other deadly conditions).

These four factors are: 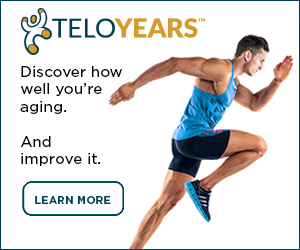 There is a proven correlation between telomere length and these four factors. For example, one study found that runners have been found to have longer telomeres than sedentary people.

Doing the right things with these four factors will not make you immortal, but it may be the difference between dying in your 90s and dying in your 60s.

I hope this article provided some practical, empowering information.

How to Choose the Right Diet Plan

Is the MyPurMist Inhaler Worth Buying?

How to Find the Right Pair of Reading Glasses

Fatty Liver – What I Wish I Had Known