Magnesium – a Great Help for Diabetics Based on information from the National Institutes of Health (NIH), magnesium is practically a wonder drug. Yet few people know about it, and few doctors recommend it. It helps maintain muscles and nerves, regulates blood sugar levels, promotes normal blood pressure, and prevents heart attacks.

In addition,  a meat-analysis of 9 trials in 2014 shows that that those with higher magnesium intake are 10-47% less likely to develop type 2 diabetes. In the U.S., however, only about 50% of the population achieve the recommended dietary allowance of magnesium, which is 400-420 mg/day for men and 300-310 mg/day for women.

This meta-analysis of 9 trials studying magnesium supplements in those with type 2 diabetes found that 360 mg/day resulted in lower fasting glucose levels, while another smaller and more recent trial studying obese, nondiabetic, insulin-resistant patients found that 365 mg/day for 6 months not only lowered fasting glucose values, but also lowered fasting insulin and insulin resistance, and improved insulin sensitivity.

In patients with other risk factors, such as mild hypertension, 3-month supplementation with magnesium was found to improve insulin sensitivity and pancreatic β-cell function. Low magnesium diets, meanwhile, have been shown to impair insulin sensitivity in just 3 weeks in otherwise healthy patients.

A study by Dr. Ka He of the University of North Carolina at Chapel Hill and colleagues found that people who consumed the most magnesium in foods and from vitamin supplements were about half as likely to develop diabetes over the next 20 years as people who took in the least magnesium.

Dr. Ka He and colleagues also found that as magnesium intake rose, levels of several markers of inflammation decreased, as did resistance to the effects of the key blood-sugar-regulating hormone insulin. Higher blood levels of magnesium also were linked to a lower degree of insulin resistance.

“Increasing magnesium intake may be important for improving insulin sensitivity, reducing systemic inflammation, and decreasing diabetes risk,” He and colleagues write. “Further large-scale clinical trials are needed to establish causal inference and elucidate the mechanisms behind this potential benefit.”

There is more understood today about the relationship between magnesium and diabetes than ever before – and it is leading healthcare professionals to state:  If you think there may be diabetes in your future, now’s the time to make sure you are getting the magnesium your body needs on a daily basis.

In the book The Magnesium Miracle by Dr. Carolyn Dean, an MD and naturopath. According to Dr. Dean, nearly 80% of Americans are deficient in magnesium, and it is often the primary factor in heart disease, high blood pressure, diabetes, and most muscular problems.

The NIH says, “Magnesium is needed for more than 300 biochemical reactions in the body… [It] is involved in energy metabolism and protein synthesis.” And according to our own Amy Campbell, “Results from three very large studies indicate that people who consume a diet rich in magnesium have a lower risk of getting Type 2 diabetes.”

People with diabetes are more likely than those without to be low in magnesium. According to an article on About.com, “Elevated blood glucose levels increase the loss of magnesium in the urine, which in turn lowers blood levels of magnesium.” So getting enough magnesium is especially important in diabetes.

In spite of these benefits, medical authorities rarely recommend magnesium. That’s why I call it the forgotten mineral. For instance, people on diuretics (“water pills”) are usually given potassium supplements to replace the potassium lost through urination. But magnesium is lost the same way and rarely supplemented.

According to the piece on About.com, “Healthy adults who eat a varied diet do not generally need to take a magnesium supplement.”

Dr. Dean strongly disagrees. She says that the Recommended Daily Allowance (RDA) is 350 to 400 milligrams per day, but for best health, we may need roughly double this amount. She says the Standard American Diet (SAD) provides very little magnesium. Soils depleted by factory farming may grow foods low in magnesium. Refined grains and processed foods have usually been stripped of most of their magnesium.

Dean isn’t the only one recommending this mineral. Drs. Andrea Rosanoff, PhD, and Mildred Seelig, MD, authors of The Magnesium Factor, state, “Mg has effects that parallel those of statins.”

In the Journal of the American College of Nutrition, they wrote, “Both statins and normal Mg levels prevent clotting, reduce inflammation and prevent [arterial] plaques. But statins raise liver enzymes, can cause [muscle damage] and have many other side effects, while Mg supplements tend to protect [muscles] and have temporary diarrhea or mild GI distress as the only side effect.”

The doctors point to studies showing that nations with low-magnesium/high-calcium diets — the US, Finland, and the Netherlands, in particular — have a lethal heart disease rate much higher than in nations with high-magnesium/low-calcium diets, such as Japan. Yet our medical system encourages statins and ignores magnesium. 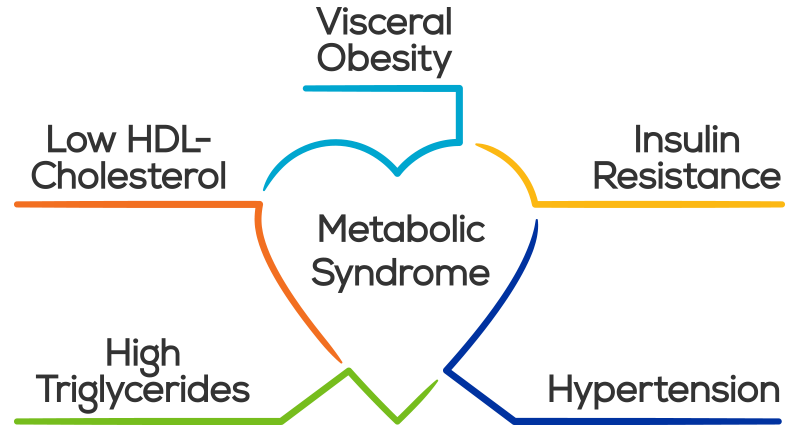 Metabolic, a word that refers to the biochemical processes that occur by the trillions every day in our cells – is also what magnesium does best:  325 metabolic, or enzymatic processes at the cellular level.    It is not surprising that magnesium, when consumed in recommended allowances every day – will minimize  the risk factors associated with Metabolic Syndromes like heart disease and diabetes.

With widespread magnesium deficiency, it is entirely possible that magnesium is responsible for far more illness than originally thought, and its role in metabolic syndromes is better understood every year.

People who have metabolic syndrome often have two other problems that can either cause the condition or make it worse:

Magnesium Levels in Patients with Diabetes

Insulin is a hormone.   It is produced by the pancreas in response to eating a meal to carry the blood sugar (glucose) produced from the meal to our cells for energy production.   Insulin resistance or insulin sensitivity refers to the challenge the pancreas is having in producing enough insulin to process the glucose in the blood.

The more difficulty the cells have metabolizing glucose, the more insulin the pancreas wants to produce.   The metabolic process of people with diabetes is no different than the metabolisms of people without diabetes.   The only difference is in the volume of insulin produced, or the body’s ability to utilize the insulin that is produced.    When there is too much glucose in the blood, two problems result:  1) The pancreas will try to keep up by producing more and more insulin, and 2) excess glucose will be turned into saturated body fat.

It can become a vicious cycle of producing more and more insulin that is less and less able to be utilized by tired cells who can no longer keep pace.  High sugar, high fat diets and a lack of exercise will make it even more difficult for the insulin to do it’s job.   And in an ironic twist, high sugar levels in the blood will make you feel lethargic, and even hungry, as the insulin is still scrambling to get the glucose to your cells to produce energy.

Eventually, the body becomes somewhat immune to the insulin, and it is no longer able to metabolize the glucose at all.   But all the non-functioning insulin in the blood – known as hyperinsulinemia –  is linked to damaged blood cells, high blood pressure, heart disease, obesity and even osteoporosis.

Stress and illness can also cause increased insulin production.

A characteristic of insulin resistance – where the body needs to produce higher volumes of insulin –  is that little to no magnesium is found in the centre of the blood cells.  This is referred to as intracellular magnesium.    We know there is a direct correlation between magnesium and insulin.   Magnesium is the one mineral that ‘twins’ with almost every other nutrient in one metabolic process or another, and the hormone insulin is no different.

Insulin has something to do with moving magnesium across the cell wall – inside and outside the cell.  Magnesium when found in adequate supply inside the cell, contributes to improve “insulin-mediated glucose uptake” which is a fancy way of saying magnesium helps insulin do its’ job.

Conversely the absence of intracellular magnesium is responsible for impairing insulin action – meaning it’s not working – and a worsening of insulin resistance in both Type 2 diabetes and in hypertensive patients, that is people with high blood pressure.

Study scientists also noted that reduced magnesium in the middle of the cell also resulted in “exaggerated calcium concentrations.”     The consequences of excess calcium are well-known in matters of the heart and calcification of organs and muscles – but this study would suggest that the imbalance of magnesium and calcium also has an impact on the management of diabetes.

The study is from the Institute of Internal Medicine and Geriatrics, University of Palermo, Italy entitled “The role of magnesium in insulin action, diabetes and cardio-metabolic syndrome X.”

Suggested:  I like Doctor’s Best High Absorption 100% Chelated Magnesium is made with TRAACS, a patented, form of bioavailable magnesium that is chelated to optimize bioavailability.

It is “not buffered,” meaning that is it not mixed with less expensive and less absorbable magnesium oxide, and it is  vegan, non-GMO, and gluten free.

This is the best-selling magnesium supplement on Amazon, with over 1,700 reviews.

Diabetes Myths – What Should You Believe?

Diabetes Complications You May Not Know About

The Fat Loss Diet I Recommend

The Most Effective Stop Smoking Aids

Find the Best Bathroom Scale for YOU