Another study investigated the potential effects of curcumin on prostate cancer cells in­ vitro. When curcumin was administered to the cancer cells, researchers observed a notable increase in cancer cell death as the curcumin concentrations increased.

Curcumin (From Turmeric) for Prostate Enlargement

A study published in the December 2012 issue of Italy’s Panminerva Medica evaluated the effect of a curcumin supplement taken by persons with BPH (enlarged prostate). Sixty­-one patients were divided into two groups for the 6-month study.

The results showed that the group who received curcumin supplementation experienced fewer urinary infections and less incontinence than the control group. Significant improvements in urinary stream and quality­ of­ life were also reported.

Researchers surmise that curcumin may actually help the body inhibit the compounds that cause prostate enlargement.

After skin cancer, prostate cancer is most common among men in US.

The prostate gland is located near the bladder of men, surrounding the urethra. This tiny gland, the size of a walnut makes seminal fluid and when a cancerous tumor forms here, it is known as prostate cancer.

Prostate cancer is the third highest cause of cancer deaths among men – especially over the age of 75. These tumors can be benign or cancerous and when caught early, can be successfully treated.

Symptoms of prostate cancer include difficult, painful and frequent urination, back and hip pain, blood in the urine and so on, when the cancer is localized.

When it spreads, a patient can suffer from kidney failure, weight loss, anemia or bone pain. Genetics, ethnicity, diet, environment or hormones could cause prostate cancer. Once diagnosed treatment of prostate cancer may consist of surgery, radiation therapy or hormone medication.

Here is some of the scientific evidence that proves turmeric’s efficacy in prostate cancer treatment.

Chemopreventive agents are those that prevent or reduce the risk of developing cancers.

Alcoholic extract of turmeric is proven to inhibit the migration and invasive potential of prostate cancer cells .

This extract contained compounds other than curcuminoids thus demonstrating that curcumin alone it not responsible for the anti-cancer potential.

Teiten et al conducted a study to assess how curcumin exhibits its chemopreventive potential in case of prostate cancer.

It was observed that for proliferation of cancer cells activity of 60 proteins was influenced and curcumin could alter the activity of 19 such proteins in order to prevent growth of such cells.

Inflammation of the prostate gland serves as a risk factor for development of prostate cancer.

A novel way by which curcumin prevents onset of prostate cancer is by serving as an anti-inflammatory agent and reducing any inflammation in the gland.

Curcumin has the potential of being developed as a chemopreventive agent against prostate cancer and therefore can be used as primary treatment for prevention of prostate cancer.

Curcumin based anti-prostate cancer agents are being developed on the premise that it acts as a multitarget drug and has the potential to treat castration resistant prostate cancer.

Study reports that out of the three curcuminoids, demethoxycurcumin shows the most efficient anti-tumor activity against prostate cancer cells.

Curcumin acts on many biochemical pathways in order to prevent cell proliferation and also to cause cancer cell death.

For example protein kinase D1 is a biological molecule that is expressed in high amounts in normal prostate cells but is reduced in prostate cancer cells.

Curcumin activates this protein and thereby prevents growth and spread of prostate cancer.

This multi targeted action of curcumin leads to apoptosis or cell death of cancerous cells which suggests its value as a chemopreventive agent.

It also prevents metastases- spread of cancer to other parts of the body. Curcumin suppresses the activity of nuclear factor-kappaB which reduces the production of pro-inflammatory chemicals CXCL1 and -2.

These if not controlled can induce metastases formation.

Researchers at Columbia University have extensively studied the effects of curcumin on prostate cancer.

Their findings reveal that curcumin can treat both hormone dependant and independant prostate cancer.

Curcumin prevents proliferation and cause apoptosis of prostate cancer cells.

It acts on hormone dependant and independant prostate cancer and prevents spread of this cancer. Other curcuminoids also show anti-tumor effect.

3. Curcumin is a Chemosensitizer and Radiosensitizer

Goel A and Aggarwal BB in the paper describe as to how curcumin specifically chemosensitizes and radiosensitizes tumor cells but at the same time protects normal cells from the harmful effects of chemotherapeutic agents and radioactivity.

Tumor necrosis factor is perhaps the principal protein involved in inflammation. Additionally modulation of its activity can induce cell death.

TRAIL mediated immunotherapy works on the principle of activating this protein to destroy cancerous cells. But cancer cells develop a resistance towards it.

Research shows that curcumin reverses this resistance and sensitizes prostate cancer cell to this treatment.

Curcumin also increases the efficacy of first line treatment drugs like bicalutamide and docetaxel which are used to treat prostate cancer.

Curcumin increases sensitivity of cancer cells to chemotherapeutic agents and radiotherapy. At the same time it protects normal cells from side effects of these treatments.

4. Curcumin is Therapeutic for Prostatitis

Prostatitis is the inflammation of the prostate gland. It can serve as a risk factor for prostate cancer.

As mentioned earlier, curcumin displays its chemopreventive potential by reducing inflammation in the prostate gland.

Prostatitis is characterised by pain in the genitals and lower back and discomfort while urinating.

A study was conducted where curcumin along with other herbal extracts were evaluated for their effect on bacterial prostatitis.

Within 6 months of treatment, the experimental group was completely treated with no sign of recurrence. Animal study proves that curcumin is effective in treating non bacterial prostatitis.

Prostatitis is inflammation of prostate gland that increases the risk of developing prostate cancer.

Due to its poor bioavailability scientists are preparing different formulations of curcumin such as nanoparticles to treat prostate cancer.

Lab studies show that extracts of turmeric and ginger in combination are potent enough to prevent growth of prostate cancer cells.

Different bioactive ingredients found in plants have been identified for their anti0cancer potential.

In a clinical trial participants received an oral capsule containing a blend of pomegranate, green tea, broccoli and turmeric for 6 months.

Prostate specific antigen (PSA) is a chemical that is secreted by prostate cells and is used as an indicator for detecting prostate cancer.

Treatment with this capsule lowered the levels of PSA thereby suggesting its efficacy as a primary treatment drug.

Zyflamend, a combination of herbal extracts-one of them being turmeric, is proven to be effective as maintenance treatment in order to keep the cancer dormant and prevent it from activating again.

Due to its low bioavailability, different formulations of curcumin are being developed to treat prostate cancer.

Herbal extracts containing curcumin are proven to efficacious in preventing onset of prostate cancer as well as preventing its recurrence.

This is worth mentioning… A 12-week study published in 2014 used animal models to compare the effects of Viagra and curcumin. You can scour the details for yourself, but, in short, at the conclusion of the 12-week study, curcumin supplementation had produced a notably improved erectile response… making many wonder if curcumin may support erectile function?

Turmeric in food is absolutely safe. But if you plan on taking supplements consult a physician to decide the best dose for you and to avoid drug interactions.

Also do not take them if you are scheduled for a surgery in next 15 days.

Curcumin for Cancer – An 8 Week Regimen

Week 1: Start with small dosage of 1 gm curcumin per day. If you see no side effects, take it for a week and proceed to dosage of week 2.

Week 2: Increase the dosage of curcumin to 2 gm/ day. Again check for any issues side effects etc. If everything looks fine, take it for a week and proceed to dosage of week 3.

Week 3: Double the dosage again to 4 gm / day. Again if things look fine, continue for a week and go for final step.

There is a great deal of research going on in order to develop turmeric and especially curcumin as an anti-cancer agent.

Turmeric can not only destroy prostate cancer cells but also reduce the risk of developing it and also reduce its activation once it has become dormant.

Start including turmeric in your life  today!

There are plenty of  turmeric curcumin choices available; I personally use and recommend Schwartz Bioresearch Premium Ultra Pure Turmeric Curcumin. 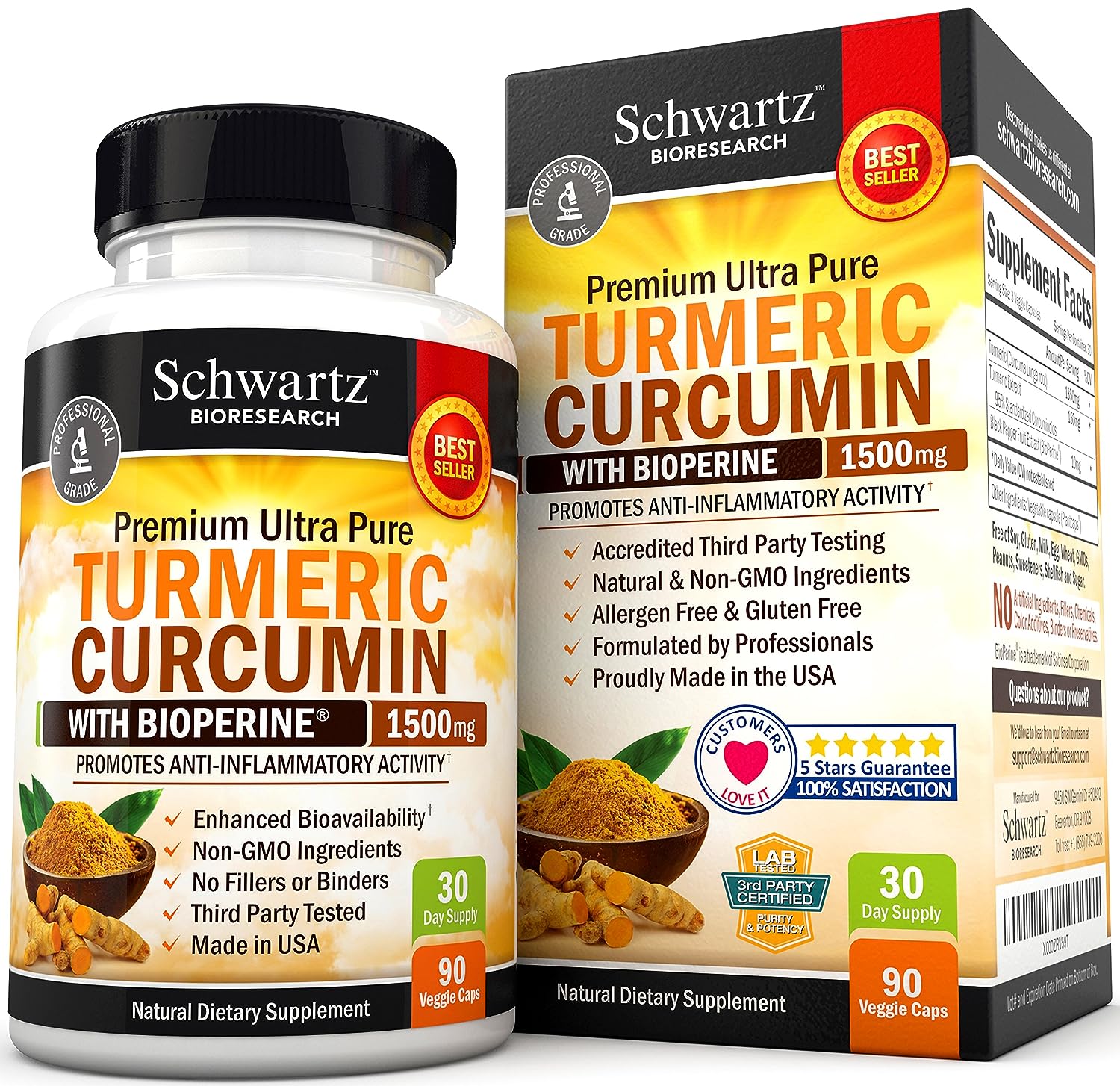 The cancer treatment and the therapies in this book go way beyond nutrition and diet each option is backed by scientific studies.

The therapies in this book are the ones your medical doctor may not mention to you, and yet, they have been scientifically proven to work (many of them work much better than any chemotherapy drug).  Many of these cancer therapies have helped millions of people to get rid of cancer once and for all.

The Most Powerful Herb on the Planet

Cancer Related Weight Loss – What To Do About It?

How to Give a Sponge Bath in Bed

All About Grab Bars and Hand Rails for Safety

Should You Install Bed Rails?

Caregivers – How to Reduce the Risks from Heavy Lifting