The Best Way to Rid Excess Ear Wax at Home

Excess ear wax buildup is called cerumen impaction, and may cause one or more of the following symptoms:

Cleaning Out the Excess Wax

To clean the ears, wash the external ear with a cloth, but do not insert anything into the ear canal.

Most cases of ear wax blockage respond to home treatments used to soften wax. Patients can try placing a few drops of mineral oil, baby oil, glycerin, or commercial drops in the ear. Detergent drops such as hydrogen peroxide or carbamide peroxide (available in most pharmacies) may also aid in the removal of wax.

Irrigation or ear syringing is commonly used for cleaning and can be performed by a physician or by using a high quality home irrigation kit.

Common solutions used for syringing include water and saline, which should be warmed to body temperature to prevent dizziness. Ear syringing is most effective when water, saline, or wax dissolving drops are put in the ear canal 15 to 30 minutes before treatment.

Caution is advised to avoid having your ears irrigated if you have diabetes, a hole in the eardrum (perforation), tube in the eardrum, skin problems such as eczema in the ear canal or a weakened immune system.

Manual removal of earwax is also effective. This is most often performed by an otolaryngologist using suction or special miniature instruments, and a microscope to magnify the ear canal. Manual removal is preferred if your ear canal is narrow, the eardrum has a perforation or tube, other methods have failed, or if you have skin problems affecting the ear canal, diabetes or a weakened immune system.

Recommended:  If you are looking for an at-home excess earwax cleaning system, I recommend the Elephant Ear Washer Bottle System by Doctor Easy. I have used this system successfully several times on my daughter, who is prone to recurring wax buildup. 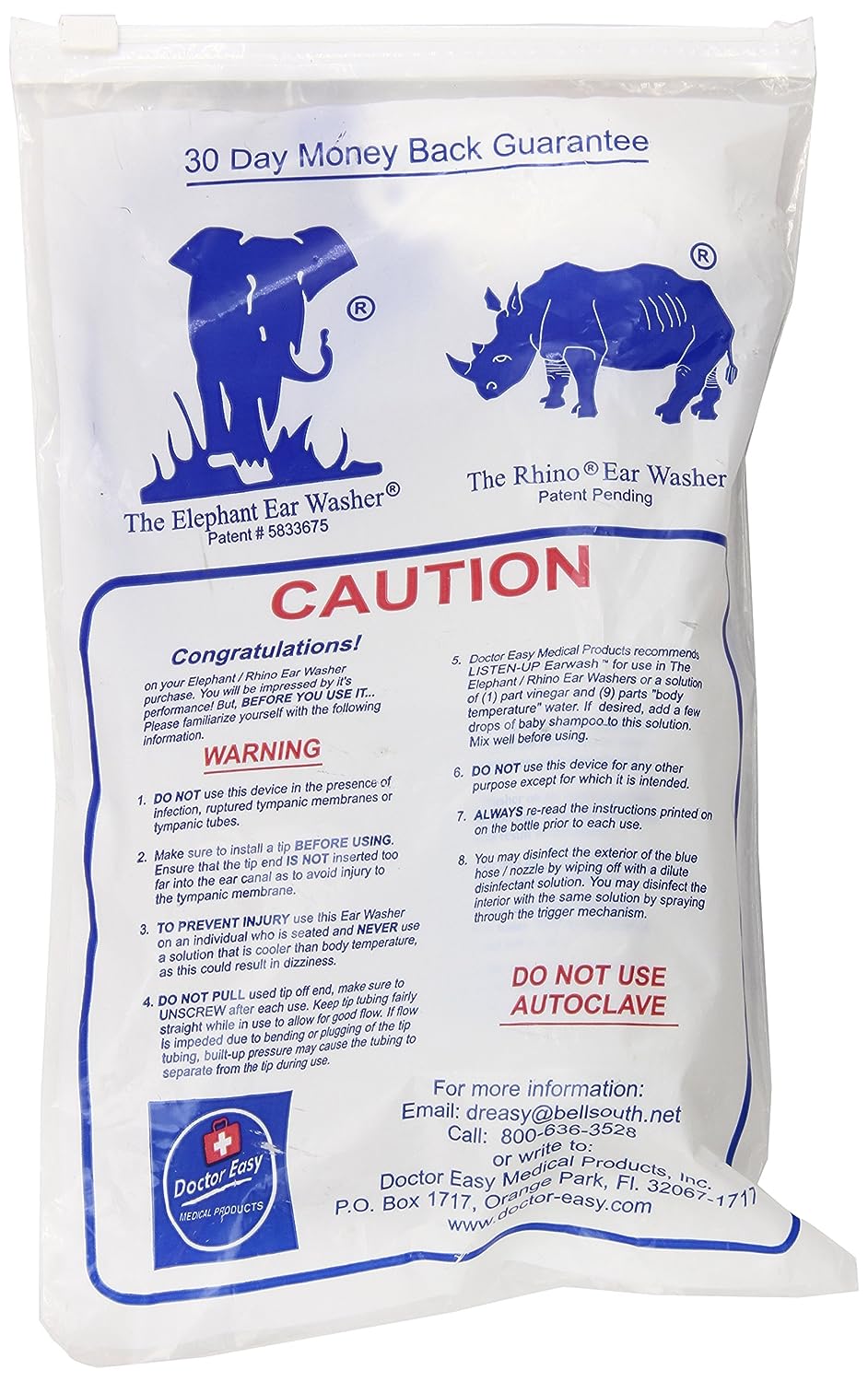 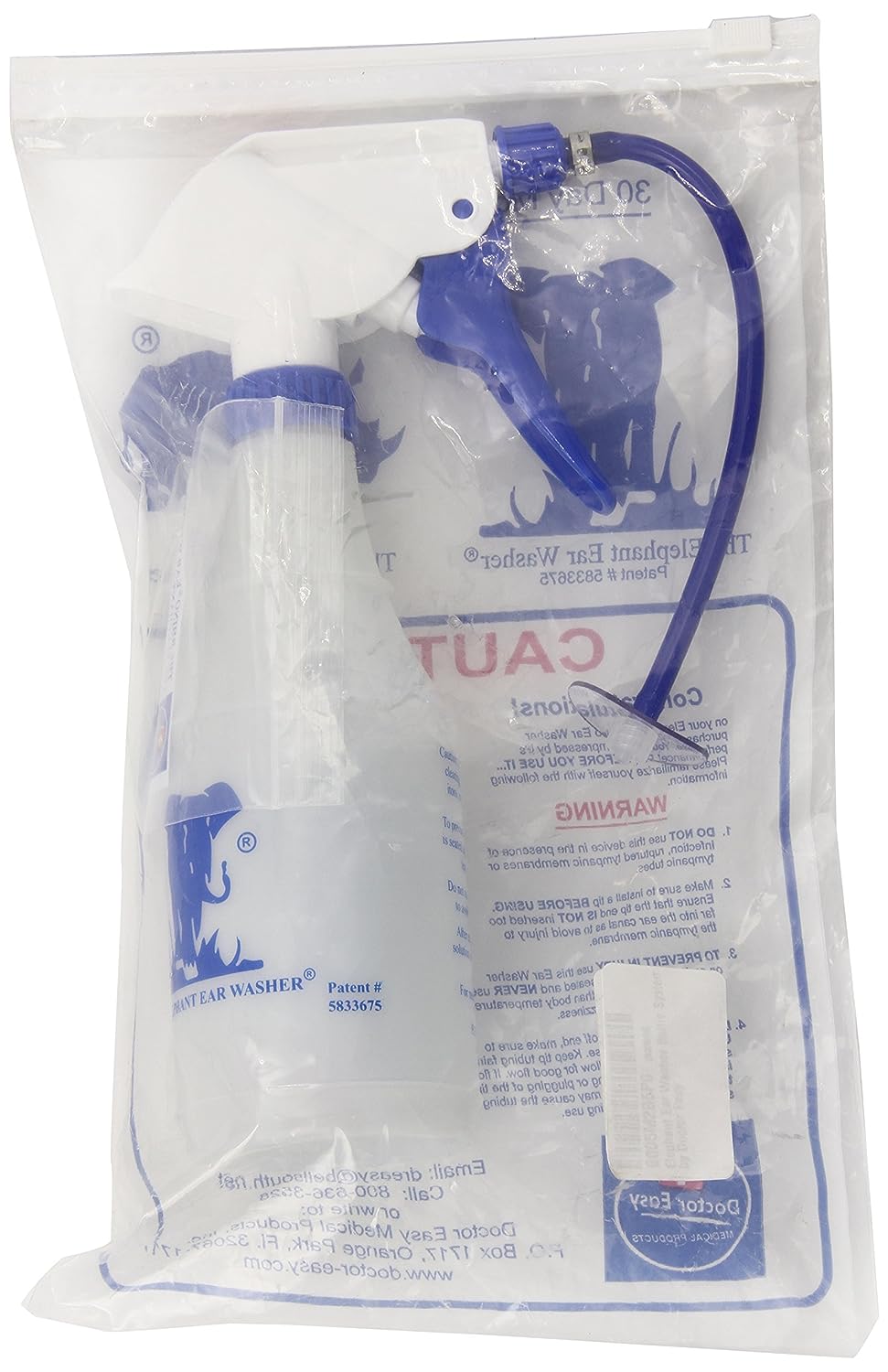 I find the Elephant Ear system is practical and inexpensive;

It has worked well for us every time.  You can view over 1,600 reviews of this product on Amazon to see how it has worked for others. Wax blockage is one of the most common causes of hearing loss. Excess ear wax buildup is often caused by attempts to clean the ear with cotton swabs. Most cleaning attempts merely push the wax deeper into the ear canal, causing a blockage.

The outer ear is the funnel-like part of the ear that can be seen on the side of the head, plus the ear canal (the hole which leads down to the eardrum). The ear canal is shaped somewhat like an hourglass narrowing part way down. The skin of the outer part of the canal has special glands that produce earwax. This wax is supposed to trap dust and dirt particles to keep them from reaching the eardrum. Usually the wax accumulates a bit, dries out, and then comes out of the ear, carrying dirt and dust with it. Or it may slowly migrate to the outside where it can be wiped off. 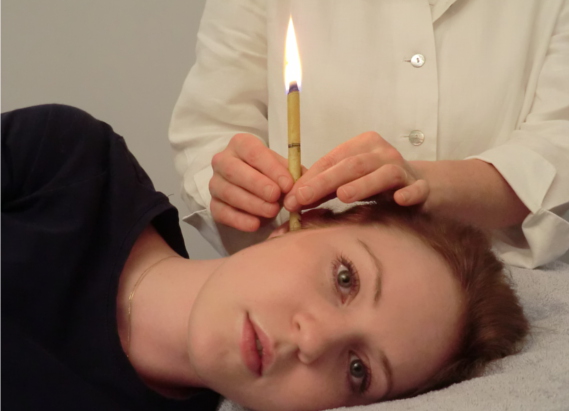 Ear candles are not a safe option of wax removal as they may result in serious injury.

Since users are instructed to insert the 10- to 15-inch-long, cone-shaped, hollow candles, typically made of wax-impregnated cloth, into the ear canal and light the exposed end, some of the most common injuries are burns, obstruction of the ear canal with wax of the candle, or perforation of the membrane that separates the ear canal and the middle ear.

The U.S. Food and Drug Administration (FDA) became concerned about the safety issues with ear candles after receiving reports of patient injury caused by the ear candling procedure. There are no controlled studies or other scientific evidence that support the safety and effectiveness of these devices for any of the purported claims or intended uses as contained in the labeling.

Based on the growing concern associated with the manufacture, marketing, and use of ear candles, the FDA has undertaken several successful regulatory actions, including product seizures and injunctions, since 1996. These actions were based, in part, upon violations of the Food, Drug, and Cosmetic Act that pose an imminent danger to health.

Should You See Your Doctor?

If the home treatments discussed in this leaflet are not satisfactory or if wax has accumulated so much that it blocks the ear canal (and hearing), a physician may prescribe eardrops designed to soften wax, or she may wash or vacuum it out.

Occasionally, an otolaryngologist (ear, nose, and throat specialist) may need to remove the wax under microscopic visualization.

If there is a possibility of a perforation in the eardrum, consult a physician prior to trying any over-the-counter remedies. Putting eardrops or other products in the ear with the presence of an eardrum perforation may cause pain or an infection. Certainly, washing water through such a hole could start an infection.