Can you avoid age-related degenerative eye disease? Our eyesight naturally diminishes to some extent as we age, but regardless of our age, our eyes should provide us with good service for a lifetime. New research reveals that age-related eye disorders can be prevented and possibly even reversed. The key to maintaining good vision depends on your diet. (Sources listed at bottom)

The body has an amazing ability for self-repair. If we get a cut, a bruise, break a bone, or suffer some other injury, the body knows exactly what to do to repair the damage. In time, the cut is completely healed, damaged blood vessels in a bruise are repaired, and broken bones are fused back together, in many cases the repair is so complete that there is little or no trace that an injury ever occurred.

Like other tissues, peripheral nerves throughout our bodies have a high capacity for regeneration after injury, however injury to nerve cells within the central nervous system (brain and spinal cord) do not. In fact, for many years it was believed that brain tissue, could not be repaired or regenerated. Once an injury occurred, the neurons, or brain cells, were gone forever. It was thought that the brain cells we were born with were all that we would ever have. We now know that this is not correct, brain cells can be regenerated and new brain cells do grow and develop just like other cells throughout the body. 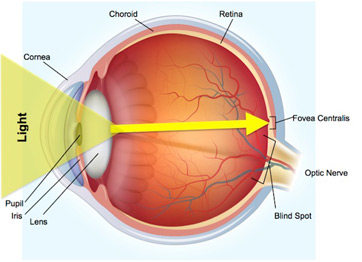 The eyes are extensions of the brain and consist of neurons or nerve cells similar to those in the brain and, likewise, have the potential to regenerate. The light sensitive portion of the eye is the retina, which lines the inside of the eyeball. When light hits the retina it sends nerve impulses to the brain. These impulses are sent to the brain through long thread-like appendages of the retina that combine to  form the optic nerve.

The most common degenerative eye diseases that involve damage to the retina and optic nerve are glaucoma, macular degeneration, and diabetic retinopathy. These three conditions cause the vast majority of irreversible vision loss in people living in affluent countries.

Glaucoma is believed to be caused, in part, by abnormal pressure within the eye. The eyeball is filled with a viscous fluid that helps maintain the shape of the eye and circulate nutrients. This fluid is constantly entering and leaving the eyeball. If it enters faster than it exists, the pressure within the eye builds up damaging the retina and optic nerve. Treatment is focused on lowering fluid pressure with the use of medicated eye drops, drugs, laser therapy, surgery, or some combination of these. However, once the retinal cells are damaged they are considered gone for good.

Diabetic retinopathy is caused by inadequately controlled diabetes. High blood sugar causes the blood vessels feeding the retina to degenerate and become leaky. This distorts the retina leading to permanent damage. Besides trying to get blood sugar under control, treatment may involve laser surgery to burn or cauterize damaged blood vessels to keep them from leaking. This permanently scars the retina, but may prevent or slow further vision loss.

For many years the inability of damaged retinal neurons and optic nerve to regrow was accepted almost as a “law of nature,” and on the clinical level, retinal injury was seen as being irreversible and corresponding vision loss was permanent. Today medical researchers are starting to unlock the secrets of neuronal regeneration. Under the right conditions, injury to the retina and optic nerve can be healed. A growing number of studies over the past two decades have demonstrated that the retina can be transformed into an active regenerative state allowing these neurons to survive injury and to regenerate the damaged optic nerve.

Almost all clinical studies using drugs as a means to protect the retina, optic nerve, and other components of the eye have failed. However, a special group of naturally occurring proteins called brain-derived neurotrophic factors (BDNFs) show great promise. BDNFs play a key role in regulating survival, growth, and maintenance of neurons. They help support the survival of existing neurons and encourage the growth and differentiation of new neurons.

Normally, injury to the optic nerve induces a rapid die-back leading to retinal cell death. However, when an adequate amount of BDNFs are present, the effects of injury are diminished and the optic nerve and retina can be repaired or regenerated.

Animal studies have shown that after cutting the optic nerve in adult rats, retinal cells progressively degenerate until, after two months, a residual population of only about 5 percent of these cells survive. When BDNFs are present, however, survival rate significantly increases. For example, in one study researchers cut the optic nerves in a group of rats. The injury to the optic nerve caused a rapid, progressive degeneration and death of the retinal neurons. After 3 weeks, only 10 percent of the retinal neurons survived. After 5 weeks, the number dropped to 8 percent, and by the 7th week only 5 percent remained. In a second group of rats BDNFs was injected into their eyes before the optic nerve was severed. In this group, two to three times as many retinal neurons survived compared to untreated controls.1

Studies show that after cutting the optic nerve, BDNFs not only protect the retinal neurons from dying, but promote regrowth. The retinal neurons sprout new growths that elongate and form functional connections with other neurons. In lab mice that have had their optic nerves severed, BDNFs allowed the animals to recover the ability of light-dark discrimination.2 In essence, researchers have been able to restore partial sight to blind mice.

We always have some BDNFs circulating in our central nervous system that helps protect our brains and eyes from degeneration. However, people with diabetic retinopathy, glaucoma, and macular degeneration have a deficiency of BDNFs, which makes them more susceptible to neurodegeneration and visual problems.3-4

BDNFs provide the potential for preventing degenerative vision loss and possibly even partially restoring lost vision. In animal studies, BDNFs can be injected directly into the eyeball to boost levels of these protective proteins. Clinically, this process is not feasible because in order to maintain therapeutic levels of BDNFs, multiple injections are needed over a period of time to maximize the benefit.5

Fortunately, BDNFs are produced naturally in our bodies. Using this fact, another approach to raise BDNFs to therapeutic levels is to boost the body’s own production of these protective proteins. This can be done quite simply through diet.

The production of BDNFs is stimulated by the presence of ketones. Ketones are produced from fatty acids stored in body fat and provide an alternative to glucose as a source of fuel for the brain.

Normally, our cells, including our brain cells, use glucose as their primary source of fuel. Most the glucose in our bodies comes from carbohydrates in our foods. When we eat a meal, carbohydrates are converted into glucose and released into our bloodstream.

Between meals or when we don’t eat carbohydrates, blood glucose levels fall. Our cells need a continual supply of energy to function, so when this happens, fat stores in the body are mobilized and fatty acids are released into the bloodstream. Our cells can use fatty acids for fuel just like they do glucose.

The brain, however, cannot use these fatty acids and must have an alternative source of fuel. Some of these fatty acids are converted into ketones, which are readily used as fuel by neurons. Ketones not only supply the brain with energy, but also trigger the production of BDNFs.

One way to increase the body’s levels of BDNFs is to eat a low-carbohydrate ketogenic diet.

A low-carb diet keeps blood glucose levels low, which causes the release of fatty acids and the production of ketones. A very low-carb or ketogenic diet stimulates greater ketone production and higher BDNF levels. Therapeutic levels of BDNFs can be attained and maintained for an indefinite period of time on a very low-carb diet.

Another way to raise ketones, and consequently BDNFs, is by eating coconut oil.

Coconut oil is composed predominately of the unique group of fatty acids known as medium chain fatty acids (MCFAs). When consumed, a significant proportion of these MCFAs are automatically converted into ketones, regardless of blood glucose levels. You can raise blood ketone and BDNF levels simply by adding coconut oil into your daily diet.

If you eat enough coconut oil, you can raise blood ketones and BDNFs to therapeutic levels. This would require the consumption of 2-4 tablespoons of coconut oil daily. A smaller amount would be needed if you combine coconut oil with a very low-carb diet.

If you want to preserve your vision and protect yourself from encountering age-related degenerative eye disorders that affect the retina and optic nerve, your safest and most effective approach would be to incorporate coconut oil into your daily diet.

If you have already experienced some vision loss due to glaucoma, macular degeneration, or diabetic retinopathy, combining coconut oil with a low-carb diet can help you prevent any further vision loss and possibly even regain some of your lost vision.

Bruce Fife, CN, ND, a certified nutritionist and naturopathic physician. He is the author of over 20 books including The Coconut Oil Miracle and Stop Vision Loss Now!

Thanks for visiting and reading … I hope this article provided some helpful ideas.  I welcome your comments below.

Are Genetic Testing Services Worth It?

Is the MyPurMist Inhaler Worth Buying?

How to Find the Right Pair of Reading Glasses